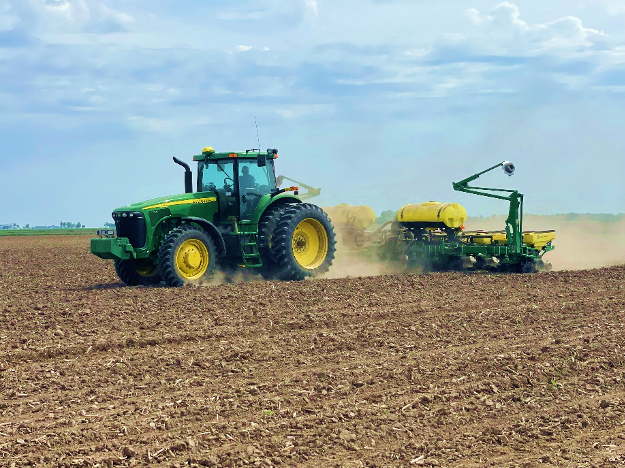 The smell of dirt being turned to the surface, the sound of planters sowing seeds, and the promise of new growth to sustain the world: Planting Season 2022 is here. Weather events and supply concerns due to the Russian/Ukrainian conflict have made for an interesting physical and economic environment for farmers. Weather delays in planting that plagued much of the Midwest have helped commodity prices continue to rise, but concerns about lower yield expectations also have grown. Discussion about prevent plant expectations have also begun and some are wondering if we are in for another growing season similar to 2019 when a record 19 million acres were unable to be planted in the United States. Among all these uncertainties, the planting and marketing environment for farmers is everchanging.

A similar pattern exists in soybean plantings as well. A multitude of severe weather conditions and an abundance of rain have kept many farmers out of the fields in these areas. However, conditions in parts of the Midwest started improving during the first half of May, speeding up planting progress. The Dakota’s, on the other hand, haven’t been as lucky. The USDA recorded only four suitable days for fieldwork in South Dakota causing a major delay in corn and soybeans planting. Only 31% of corn and 15% of soybeans have been planted down from 83% and 61% respectively, from the previous year. Many economists and agriculturalists are beginning to wonder what kind of impact late planting could have on yields and subsequently commodity supply.

Impact of Late Planting on Yields

The 2022 growing season for corn and soybeans is just beginning and there are still many looming factors that could affect yields at harvest. Experts at the University of Illinois at Urbana-Champaign researched the impact late planting could have on corn yields. Under their model, corn planted after May 30th starts to create some yield penalties. Their study found that a 10% increase in late planting only leads to a two bushel per acre decrease in corn yield. A similar study conducted in 2020 found that soybeans planted after May 25th started to see declines in soybean yields. The results concluded that a 10% increase in late planting leads to between a .4 and .7 bushels per acre decline in yields. A larger impact on yield typically comes from adverse weather during the summer, however, even a small drop in yield can affect the balance of commodity supply and demand.

As previously stated, many U.S. states are beginning to approach prevent plant dates, most notably the Dakotas. Starting May 25th, North Dakota will begin to see prevent plant Insurance dates hit, and while rumors have been speculated that farmers may ask legislators to extend insurance dates this year, prevent plant acres will prevail, nonetheless.

John Newton, Chief Economist at the U.S. Senate Committee on Agriculture, Nutrition, and Forestry recently shared an interesting post on Twitter highlighting previous prevent plant years. Using 2013 and 2019 as reference points, these have been the two most recent years in U.S. planting progress history where significant levels of prevent plant has occurred due to a late spring planting season. The average yearly prevent plant acreage, according to FarmDocDaily, equals 5.6 million acres per year, with the largest year to date in 2019 when prevent plant totaled 19.6 million acres.

The question remains, how many prevent plant acres will the U.S. see in 2022, and what kind of price action will commodities see following that news?

U.S. yield concerns aren’t the only thing worrying experts when it comes to global commodity supplies. The Russian/Ukrainian conflict continues to affect markets as the Ukrainian Grain Traders Union (UGA) predicts a 20% decline in overall crop plantings in Ukraine. Analysts worry that even if Ukrainian producers can harvest a crop, they will have difficulty exporting it outside of Ukraine, as many of the country’s ports have been destroyed due to the conflict. This could have a significant impact on the world wheat market as Ukraine is the fifth largest producer of wheat in the world.

U.S. wheat production is also facing uncertainty as 68% of winter wheat planted in the U.S. is facing a severe drought. In contrast, those trying to plant spring wheat are facing excessive moisture. See Figure 2 for details about the types of wheat grown regionally in the United States. The severe drought is having a major impact on hard winter wheat yields as the Wheat Quality Council recorded an average yield estimate of 39.7 bushels per acre on their 2022 Hard Winter Wheat Tour. This average is down more than 12 bushels from last year’s average of 52 bushels per acre. As the outlook for corn, soybean, and wheat supplies tighten, demand for these products continues to rise. The USDA’s May 2022 World Agricultural Supply and Demand Estimates reflected these factors with falling world wheat and coarse grains ending stocks.

Figure 2: Wheat Grown by Region in the United States

The global supply of wheat is also being hurt by severe heat facing the world’s eighth-largest supplier of wheat, India. March 2022 brought about record high temperatures in South Asia that have shriveled the wheat crop. India is already experiencing soaring prices and their government fears looming food shortages. On May 14th, India announced it would be banning exports of wheat, putting a deeper strain on the already tightening wheat market. “India had one of the few remaining significant stocks of wheat available to replace Ukrainian, and possibly Russian, supplies,” said Dr. Scott Irwin, Professor at the University of Illinois at Urbana Champaign. The uncertainty around global wheat supply is driving wheat prices upwards, making wheat an attractive crop to produce for farmers. However, consumers are likely to see that eating away at their already depleting wallets.

The jury is still out on how many prevent plant acres will be claimed as planting uncertainties continue, and it is something economists will be watching closely in the coming month as final insurance planting dates loom. Farmers facing adverse planting conditions may need to start evaluating their prevent plant options with the Risk Management Agency. It will also be crucial to continue monitoring your own farm’s yield expectations for marketing and hedging purposes. While there is much market uncertainty, strong commodity prices continue to bolster farm returns but as we have seen before, this can change in an instant. For example, on August 12th, 2019, prices for corn and soybeans declined by almost $.30 and $.10 respectively after final prevent plant acres were determined. The saying goes “buy the rumor and sell the fact” and the market had already anticipated large prevent plant acres prior to the release of the final numbers. After the totals were released and expectations were not quite realized, a sell-off occurred bringing about more volatility in commodity markets. Expectations about prevent plant acres in 2022 are starting however these expectations will sure up more after prevent plant enrollment deadlines occur next month. More price swings are to be expected this year with all the market and planting uncertainty. If you would like help visualizing your marketing plan in this uncertain environment, contact Farmers Risk today.