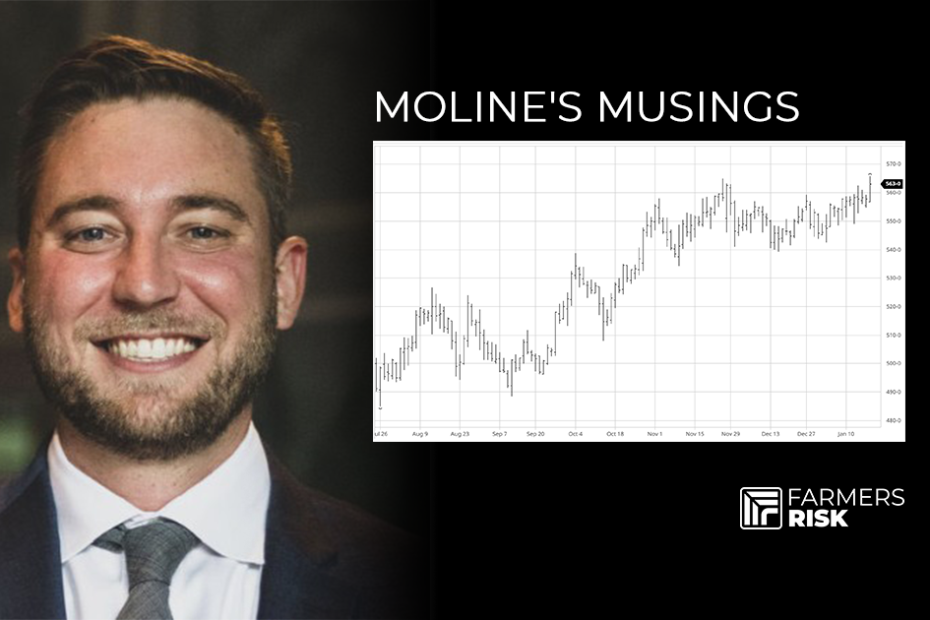 This issue of Moline’s Musings is meant to be a high-level overview of some of the options products available to farmers. Future issues may get more in-depth on certain aspects of option pricing, strategies, and position management, but today’s goal is to build a foundation. Please note the products we discuss in this issue can be traded on the Farmers Risk platform.

Now as the title suggests, when it comes to options contracts, you have a variety of options to choose from. However, despite an overwhelming number of variations across commodity markets, two things remain constant. Every exchange-traded option is either a call or a put and for each call and put, there is always both a buyer and seller.

Let’s compare options to something some might be more familiar with – life insurance. For this example, let’s specifically look at term life. The purchaser of term life insurance would be the option buyer. The seller of the insurance is the option seller or writer. An individual pays (option buyer) an insurance company (option seller) a premium for the right to be paid out a death benefit if the individual dies during a specific period. If you have ever purchased term life insurance, you know that there are multiple factors that dictate your monthly premium. The same is true in the world of financial options contracts. We’ll highlight two factors; volatility and time in this article.

Let’s say twin brothers each wanted to buy a term life insurance policy. Brother 1 is overweight, smokes, and enjoys skydiving on the weekend. Brother 2 has a relatively healthy lifestyle, and a good weekend entails a trip to the Home Depot and Bed, Bath, and Beyond. It, therefore, makes intuitive sense that brother 1 (the skydiver) would pay a higher premium than his brother for the same policy. The overweight smoker who skydives lives a more volatile lifestyle. If the two brothers’ policies are the same, there’s a greater likelihood the insurance company would have to pay death benefits for brother 1 vs. brother 2.

Bringing it back to the grain market, with all other parameters held constant, a corn option that has a 30-day tenor (30 days from expiry) is likely going to cost more in June than in December.

In June, the weather over the next month has an enormous impact on corn production in the United States, making this timeframe much more volatile than in December when the size of the crop is largely known, and the market has shifted its focus to domestic demand and South American weather.

Now, let’s exclusively focus on brother 2. He is debating between purchasing a 10-year or 30-year policy term life insurance policy.

Which one has a higher monthly premium?

The blunt reality is that it is more likely that man passes away within the next 30 years vs. the next 10.

^ more on both these option types later

Both options reference December of 2022 futures, which option will have a lower premium?

Different types of agricultural options provided by the CME

*Is there a reason we don’t have an example for standard options?

In March, a farmer wants to protect the downside price risk for his new crop corn on the board. However, he doesn’t want to answer unexpected margin calls. He could therefore opt to buy a put. The put would provide him some downside protection until late November.

In February, a farmer opts to spot-sell grain to a local ethanol plant because of an unseasonably high basis. However, she believes the board price is set to rally in the next month. She could buy a May call, which expires in late April, to participate in any rally.

Example of when a serial option might be used: In September, a farmer would like to protect downside price risk for his new crop corn that he expects to harvest in October with a long put option. The standard Dec option expires toward the end of November. This producer chooses to purchase a November serial option which expires towards the end of October because he does not need to pay the additional premium for the additional month of protection. The expiry of the November serial put options better aligns with when the producer will make the physical sale.

Example of when a short-dated new crop option might be used: It is early April, and this producer is just about to begin planting a corn crop and wants to protect downside price risk on those bushels. The producer is well aware of the seasonal tendency for prices to rally during the spring and early summer as production uncertainly ramps up. The producer is also aware that if no major weather issues develop, that premium is usually swiftly retracted from the market. This producer chooses to purchase an August Short-Dated New Crop put option rather than a standard December put option. The Aug SD NC put expires towards the end of July while the standard Dec option expires towards the end of November. By lopping off the last 4 months of optionality, the producer can purchase an at-the-money put that is cheaper than the standard December option.

Example of when a weekly option could be used: It’s the day before the August WASDE report and pre-report yield expectations are all over the map. This producer is bullish but worried there could be a bearish surprise around the corner in the WASDE report. To protect his downside risk on some bushels he still has in on-farm storage, the producer buys Week 2 August corn puts. These expire on the second Friday in August, the same day that the August WASDE is released. This producer can protect those bushels at a cheaper premium cost with Aug Week 2 puts than he or she can with standard September put options which expire 2 weeks later. Both options reference September corn futures as the underlying contract, but the expiry dates differ.

The CME offers a plethora of choices for you to protect price risk and retain flexibility through optionality. The main difference between standard options and most of the products we outlined is expiry dates. Throughout the calendar year, there is literally a corn option expiring at the end of every week whether that be a standard option, serial option, short-dated new crop option, or weekly option. The main benefit to hedgers is they are able to find an option with an expiry date that matches the time in which their physical exposure has ended, or they feel they no longer need optionality. Oftentimes, a producer can protect themselves in a more cost-effective manner by using non-standard options which are becoming more and more popular in recent years.